In Ukraine, the fighting has intensified, but the church remains a symbol of hope for many. Join us as we reflect on the Archbishop of Canterbury’s words after visiting local partners and persist in our prayers for peace. 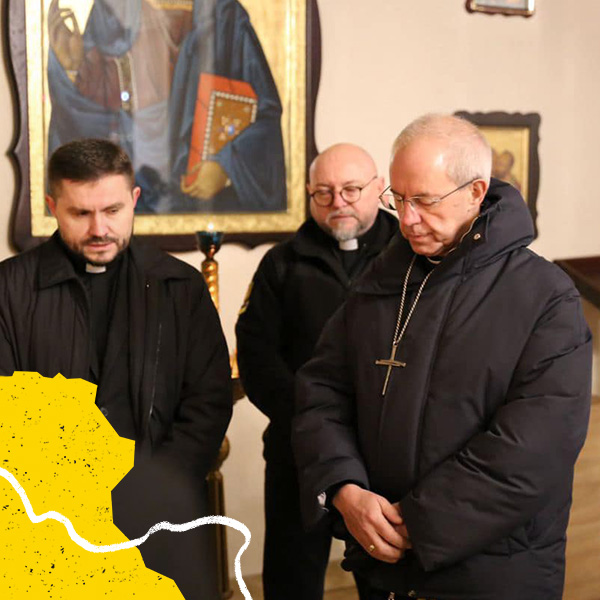 Since the conflict began, Tear Fund’s local church partners have been able to reach tens of thousands of people in need – inside Ukraine and in neighbouring countries. Alongside providing shelter, food and trauma support, they are also running art therapy classes and children’s groups.

Just before Christmas, Justin Welby, the Archbishop of Canterbury, visited one of the local partners to show solidarity with the people of Ukraine and to see what more could be done to support people.

During his trip, the Archbishop met with church leaders, as well as people who had fled the violence, so he could hear firsthand what people were going through. He also went to Irpin and Bucha to see the devastation caused by the fighting there last spring.

‘We stand with you’

The Archbishop referred to his visit as ‘a tiny gesture of solidarity with a suffering yet courageous people. It was about saying to them, you’re not forgotten; we pray for you, we support you, we stand with you, and we’ll advocate for you.

‘Five to six hundred years before Jesus Christ, Isaiah prophesied that justice and peace will come at some point, that weapons will be turned into ploughshares (Isaiah 2:4). And yet we stand amidst godless leaders ruling by violence and fear, with armies struggling by night. At the time of Isaiah, people were living in a similar world, in the shadow of death, in darkness, exile, suffering, famine, and torture.

‘Just think of that: Jesus was recognised after his resurrection most often by the scars on his hands and feet and side; the church is not a place of retreating from the world… Ukraine spoke deeply to me, passionately, of a church enduring with the people who endured — not separate, not privileged, not special, but full of love and the grace of God…

‘The revolution that came at Christmas — of light in the world — is alive now in churches shining into the darkness.’

One thought on “A message of solidarity for Ukraine”