The four central windows were gifted by Matthew Corbett, in memory of his son Sergeant James Brownlie Corbett of the Royal Air Force, who was shot down and killed over Holland on 26 May 1943. These windows were designed and fitted by the Abbey Studio under the direction of Frank Ryan. They were dedicated on 7 October 1962.

The third window on east, or left, side as you enter from main door displays some of the Miracles of Jesus and is designed and executed by the Abbey Studios.

At the top, on the left side of the window, Alpha and Omega can be seen with Jesus sitting below, dressed in a red robe, breaking a loaf of bread.  A small boy dressed in blue is sitting alongside with four other loaves and there are two fish lying on the ground.

Below that, Jesus can again be seen; this time with his arms raised.  Two men are at his feet, one with a walking stick and the other with his eyes closed; perhaps blind.  The words around this picture say, ‘The prayer, faith, shall save the sick,’ which is a reference to James 5; 15 where it says, ‘And the prayer of faith shall save the sick, and the Lord shall raise him up.’

Other people in the crowd are seen at the bottom of the right window frame; two men on their knees, a man and woman with a baby and a boy, another man sitting with his eyes closed.

This well-known story appears in all four Gospels.  In John 6 (page 124 of the Pew Bible), we read:

Verse 9 – ‘There is a boy here who has five loaves of barley bread and two fish.  But they will certainly not be enough for all these people’

Verse 11 – Jesus took the bread, gave thanks to God and distributed it to the people who were sitting there.  He did the same with the fish and they all had as much as they wanted.

The story continues at the top of the right side of the window where a boat can be seen with Christ walking on the water and taking Peter’s hand when he starts to sink.  See Matthew 14, verse 22-32 (page 22 of the Pew Bible):

Then Jesus made the disciples get into the boat and go on ahead to the other side of the lake while he sent the people away.  After that he went up a hill by himself to pray.  When evening came, Jesus was there alone and by this time the boat was far out in the lake, tossed about by the waves.  Between 3 and 6 in the morning Jesus came to the disciples walking on the water.  When they saw this, they were terrified.  Jesus said at once, ‘Courage, it is I.  Don’t be afraid.’  Peter said, ‘Lord if it really is you, order me to come out on the water to you.’  Jesus said, ‘Come!’ So, Peter started walking on the water towards Jesus but when he noticed the strong wind, he was afraid and started to sink down in the water.  ‘Save me, Lord!’ he cried.  So, Jesus grabbed hold of him and said, ‘How little faith you have!  Why did you doubt?’  They both got into the boat and the disciples worshipped Jesus.  ‘Truly you are the Son of God!’

It is a two manual and pedal instrument by Hilsdon (Glasgow) from 1930.

Bellshill Central Church is fortunate to have many beautiful stained glass windows.

The four corner windows were gifted in memory of the Blackie Family, benefactors of the Church for many years and were dedicated on 14 October 1973. These were designed by the renowned Gordon Webster with the leadwork being undertaken by Neil Hutchison.

This window is quite complex and takes its theme from the Book of Revelations (page 313 onward in the New Testament section of the Pew Bible). The themes depicted are repeated in various forms throughout Revelations and it is worth spending some time reading the book for yourself.

The window is split into six panes and here are some suggestions for the verses which relate to each pane:

Right side top and centre
There in heaven was a throne with someone sitting on it.  The Greek letters alpha and omega are represented.  Alpha (Α or α) and omega (Ω or ω) are the first and last letters of the Greek alphabet, and a title of Christ and God in the Book of Revelation – Chapter 4 v 2

Top right side
Don’t be afraid, I am the first and the last. I am the living one! I was dead but now I am alive for ever and ever. Chapter 1 v 17

Two Centre Panes
From the throne came flashes of lightning. In front of the throne seven lighted torches were burning – Chapter 4 v 5

Bottom two panes
Also in front of the throne there was what looked like a sea of glass, clear as crystal Chapter 4 v 6

Bottom right side
Surrounding the throne on each of its sides were four living creatures. The first one looked like a lion – Chapter 4 v 7

What Is New Jerusalem?

“New Jerusalem,” an expression that appears twice in the Bible, is a symbolic city that represents the group of Jesus’ followers who go to heaven to rule with him in God’s Kingdom. (Revelation 3:12; 21:2) The Bible shows that this group can also be called the bride of Christ.

New Jerusalem is made up of a group of Jesus’ followers, the bride of Christ. New Jerusalem is called “the bride, the Lamb’s wife.” (Revelation 21:9, 10) In this symbolic description, the Lamb refers to Jesus Christ. (John 1:29; Revelation 5:12) “The Lamb’s wife,” Christ’s bride, represents Christians who will be united with Jesus in heaven. The Bible likens the relationship between Jesus and these Christians to that of a husband and wife. (2 Corinthians 11:2; Ephesians 5:23-25) In addition, the foundation stones of New Jerusalem are inscribed with “the 12 names of the 12 apostles of the Lamb.” (Revelation 21:14) This detail helps to confirm the identity of New Jerusalem, since Christians who are called to life in heaven are “built up on the foundation of the apostles and prophets.”—Ephesians 2:20.

New Jerusalem is part of a government. Ancient Jerusalem was the capital of Israel, the place where King David, his son Solomon, and their descendants ruled “on Jehovah’s throne.” (1 Chronicles 29:23) Jerusalem, called “the holy city,” thus represented God’s rulership in the family line of David. (Nehemiah 11:1) New Jerusalem, also called “the holy city,” is made up of those who join Jesus in heaven “to rule as kings over the earth.”—Revelation 5:9, 10; 21:2.

Removal of sin. “A river of water of life” flows from New Jerusalem and supports “trees of life” that are “for the healing of the nations.” (Revelation 22:1, 2) This physical and spiritual healing will remove sin and enable people to gain perfect life, as God originally intended.—Romans 8:21.

Good relations between God and humankind. Sin has alienated humans from God. (Isaiah 59:2) The removal of sin will allow for the complete fulfillment of this prophecy: “The tent of God is with mankind, and he will reside with them, and they will be his people. And God himself will be with them.”—Revelation 21:3.

The end of suffering and death. By means of his Kingdom, God “will wipe out every tear from their eyes, and death will be no more, neither will mourning nor outcry nor pain be anymore.”—Revelation 21:4.

The four central windows were gifted by Matthew Corbett, in memory of his son Sergeant James Brownlie Corbett of the Royal Air Force, who was shot down and killed over Holland on 26 May 1943. These windows were designed and fitted by the Abbey Studio under the direction of Frank Ryan. They were dedicated on 7 October 1962. 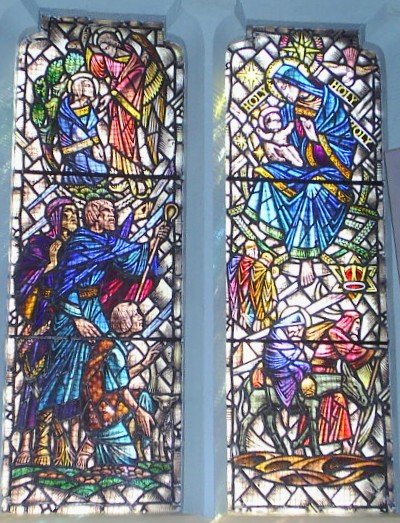 The whole Christmas Story is told in this window.  At the top left hand side, the Angel Gabriel can be seen speaking to Mary: (See Luke Chapter 1, verse 26; starting on Page 73 in the Pew Bible)

“The angel came to her and said, ‘Peace be with you!  The Lord is with you and has greatly blessed you!’  The angel said to her, ‘Don’t be afraid, Mary; God has been gracious to you.  You will become pregnant and give birth to a son and you will name him Jesus.”

The window pane below that moves on to Luke Chapter 2, beginning at Verse 8.  This is a section of the Christmas story which many ‘older people’ can recite by heart using the King James Translation:

And there were in the same country shepherds abiding in the field, keeping watch over their flock by night.  And, lo, the angel of the Lord came upon them, and the glory of the Lord shone round about them: and they were sore afraid.   And the angel said unto them, Fear not: for, behold, I bring you good tidings of great joy, which shall be to all people.   For unto you is born this day in the city of David a Saviour, which is Christ the Lord.   And this shall be a sign unto you; Ye shall find the babe wrapped in swaddling clothes, lying in a manger.   And suddenly there was with the angel a multitude of the heavenly host praising God, and saying, Glory to God in the highest, and on earth peace, goodwill toward men.

At the top right hand side of the window, we see Mary and baby Jesus as the shepherds would have found them (verse 16).

Below that, the story moves to Matthew Chapter 2, verse 10 (page 4 in the Pew Bible) where we read about the wise men (or kings) following the star until they found Jesus.

“When they saw it (the star) how happy they were; what joy was theirs!  It went ahead of them until it stopped over the place where the child was.  They went into the house and when they saw the child with his mother Mary, they knelt down and worshipped him.  They brought out their gifts of gold, frankincense and myrrh.”

The bottom pane of the window shows the escape into Egypt.  We remember how Joseph was warned in a dream that Herod planned to kill Jesus.  Matthew 2, verse 14:

“Joseph got up, took the child and his mother and left during the night for Egypt where he stayed until Herod died.”