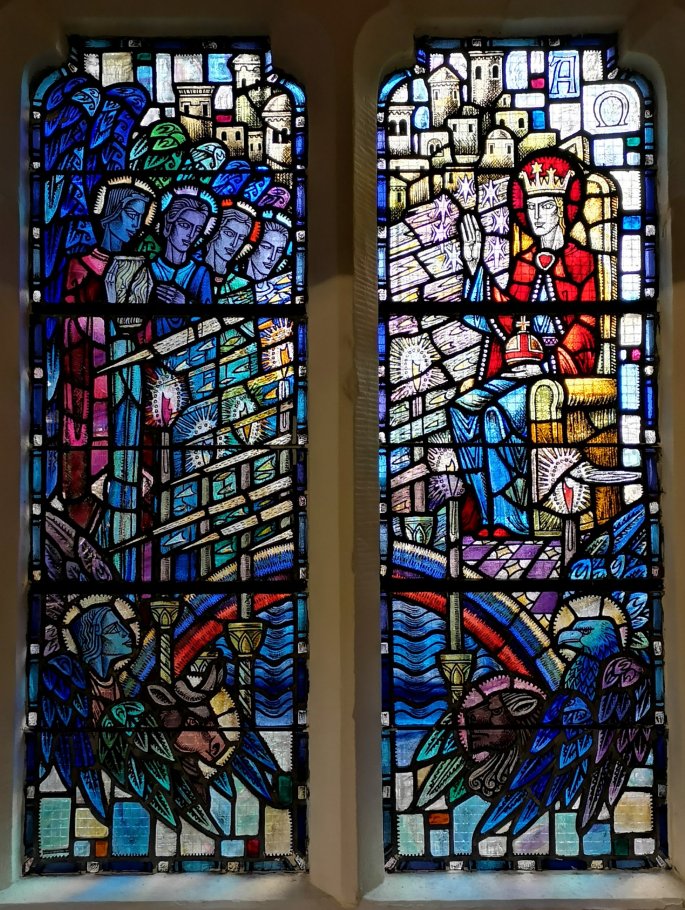 Bellshill Central Church is fortunate to have many beautiful stained glass windows.

The four corner windows were gifted in memory of the Blackie Family, benefactors of the Church for many years and were dedicated on 14 October 1973. These were designed by the renowned Gordon Webster with the leadwork being undertaken by Neil Hutchison.

This window is quite complex and takes its theme from the Book of Revelations (page 313 onward in the New Testament section of the Pew Bible). The themes depicted are repeated in various forms throughout Revelations and it is worth spending some time reading the book for yourself.

The window is split into six panes and here are some suggestions for the verses which relate to each pane: 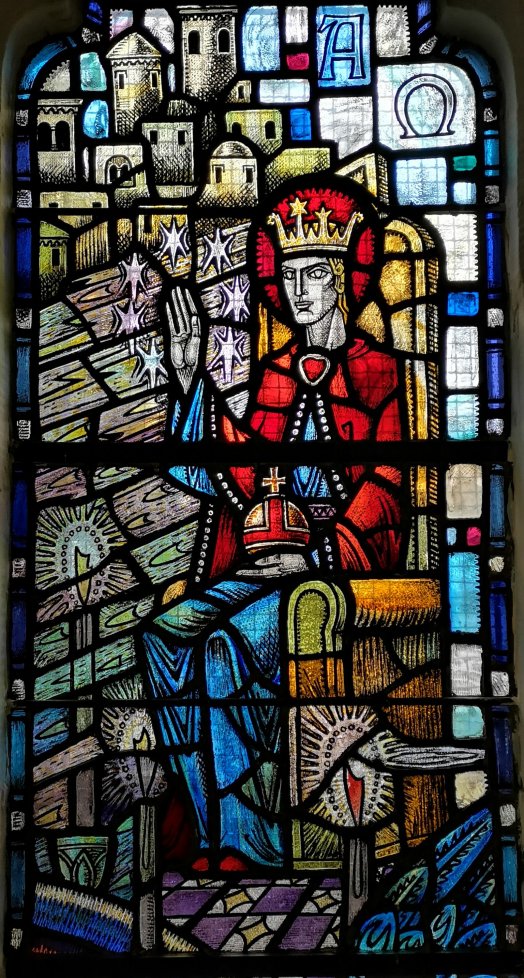 Right side top and centre
There in heaven was a throne with someone sitting on it.  The Greek letters alpha and omega are represented.  Alpha (Α or α) and omega (Ω or ω) are the first and last letters of the Greek alphabet, and a title of Christ and God in the Book of Revelation – Chapter 4 v 2

Top right side
Don’t be afraid, I am the first and the last. I am the living one! I was dead but now I am alive for ever and ever. Chapter 1 v 17

Two Centre Panes
From the throne came flashes of lightning. In front of the throne seven lighted torches were burning – Chapter 4 v 5

Bottom two panes
Also in front of the throne there was what looked like a sea of glass, clear as crystal Chapter 4 v 6

Bottom right side
Surrounding the throne on each of its sides were four living creatures. The first one looked like a lion – Chapter 4 v 7 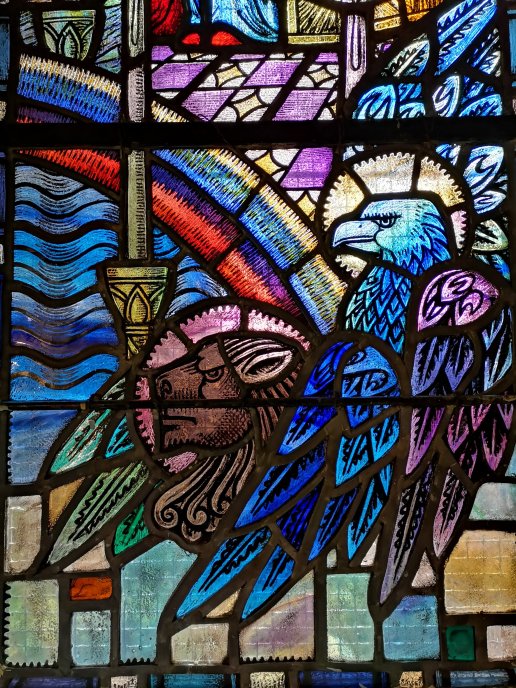 What Is New Jerusalem?

“New Jerusalem,” an expression that appears twice in the Bible, is a symbolic city that represents the group of Jesus’ followers who go to heaven to rule with him in God’s Kingdom. (Revelation 3:12; 21:2) The Bible shows that this group can also be called the bride of Christ.

New Jerusalem is made up of a group of Jesus’ followers, the bride of Christ. New Jerusalem is called “the bride, the Lamb’s wife.” (Revelation 21:9, 10) In this symbolic description, the Lamb refers to Jesus Christ. (John 1:29; Revelation 5:12) “The Lamb’s wife,” Christ’s bride, represents Christians who will be united with Jesus in heaven. The Bible likens the relationship between Jesus and these Christians to that of a husband and wife. (2 Corinthians 11:2; Ephesians 5:23-25) In addition, the foundation stones of New Jerusalem are inscribed with “the 12 names of the 12 apostles of the Lamb.” (Revelation 21:14) This detail helps to confirm the identity of New Jerusalem, since Christians who are called to life in heaven are “built up on the foundation of the apostles and prophets.”—Ephesians 2:20.

New Jerusalem is part of a government. Ancient Jerusalem was the capital of Israel, the place where King David, his son Solomon, and their descendants ruled “on Jehovah’s throne.” (1 Chronicles 29:23) Jerusalem, called “the holy city,” thus represented God’s rulership in the family line of David. (Nehemiah 11:1) New Jerusalem, also called “the holy city,” is made up of those who join Jesus in heaven “to rule as kings over the earth.”—Revelation 5:9, 10; 21:2.

Removal of sin. “A river of water of life” flows from New Jerusalem and supports “trees of life” that are “for the healing of the nations.” (Revelation 22:1, 2) This physical and spiritual healing will remove sin and enable people to gain perfect life, as God originally intended.—Romans 8:21.

Good relations between God and humankind. Sin has alienated humans from God. (Isaiah 59:2) The removal of sin will allow for the complete fulfillment of this prophecy: “The tent of God is with mankind, and he will reside with them, and they will be his people. And God himself will be with them.”—Revelation 21:3.

The end of suffering and death. By means of his Kingdom, God “will wipe out every tear from their eyes, and death will be no more, neither will mourning nor outcry nor pain be anymore.”—Revelation 21:4.