We look first at the Communion Table. It is placed centrally within the choir box. Our communion table is made of wood and was gifted to the Macdonald Memorial congregation in 1930 by Gavin Blackie JP.

The use of a simple table, generally built of wood, instead of an altar made of stone reflects the Reformed churches’ rejection of the suggestion of sacrifice in the rite: they believe that the Passion of Jesus Christ was a perfect sacrifice for sins made once for all (Hebrews 9:25-10:4).

Having or not having a Communion table was a subject of dispute within Scottish Presbyterianism in the 17th century, with the Independents opposing its use.

There is an inscription of This do in remembrance of Me carved along the top above three carved gothic arches. The inscription is taken from the Last Supper (Luke 22:19, 1 Corinthians 11:24), indicating the belief in Holy Communion being a memorial rather than a sacrifice. 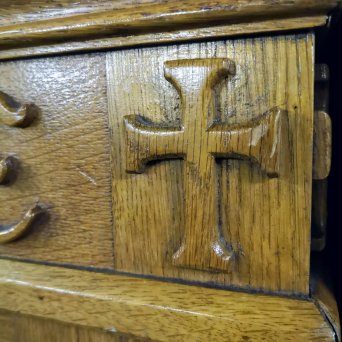 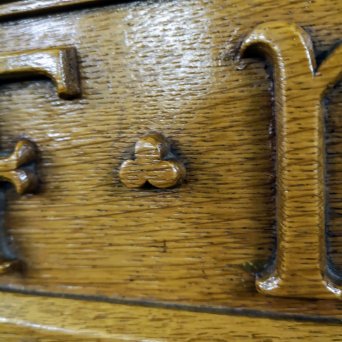 There are “motifs” carved into the detail of the table including the Cross, Trefoil and Quatrefoil. The Cross is significant as it is depicted as empty, and reminds us of Christ Risen from the Dead. The Trefoil signifies the Holy Trinity, The Quatrefoil leaves represent the four evangelists of the Bible: Matthew, Mark, Luke, and John.

Now we look at the two lecterns, also found in the Choir Box.

A lectern (from the Latin lectus, past participle of legere, “to read”) is a reading desk, with a slanted top, usually placed on a stand or affixed to some other form of support, on which documents or books are placed as support for reading aloud, as in a scripture reading, lecture, or sermon. 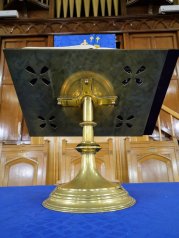 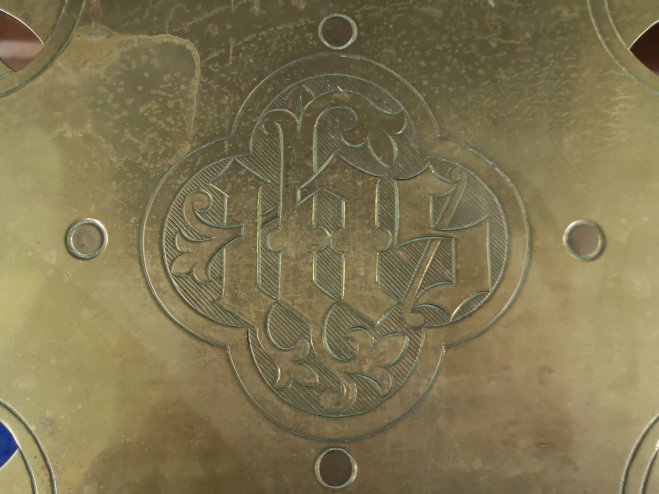 The free standing lectern is where the Bible Readings are read from each week during Sunday Worship, placed on it is the Good News Translation of the Bible. It was gifted by the family of William and Margaret Ferguson to The Macdonald Memorial Church in September 1972.

The brass table lectern is found on the Communion Table. The open bible placed on it shows significance of the Word as central to our Reformed Presbyterian worship. There are again symbols on this lectern. At each corner is found a quadruple pattern signifying the four evangelists. Hidden from view, underneath the Bible, is found a glorious engraving of the IHS symbol – a Christogram – a combination of letters that represent the holy name “Jesus.”