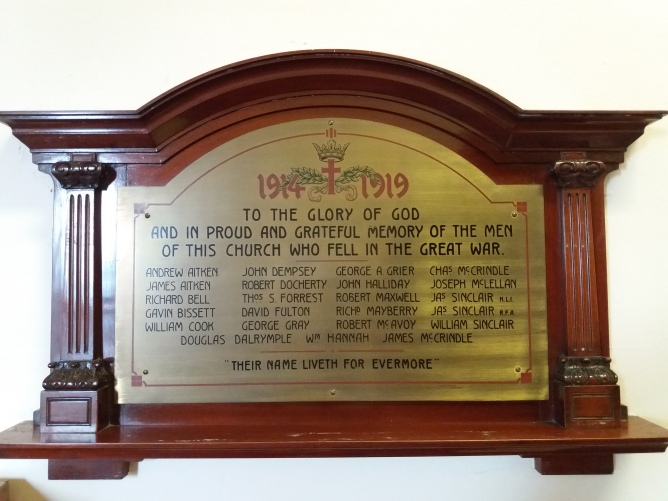 WW1 those who served

The first plaque lists the names of those who died during the Great War, with the inscription THEIR NAME LIVETH FOR EVERMORE.

The second plaque lists the names of the men from the congregation who served in the various armed forces during the Great War.

Download a PDF version of the plaques – here. Where you can see in greater detail all of the names included.

FROM “ANNALS OF THE MACDONALD MEMORIAL U F CHURCH” (1924)

While yet the year 1914 was no more than two-thirds gone, the sounds of a great conflict were rumbling through the air. By the first week of August, our own country was involved and everyone knows what that meant for men and women and little children. To thousands, the word Sacrifice took on a more sinister and intense meaning than had been known before. Through the length and breadth of the land, the call was for Service. Men wanted! And the response was magnificent. True, in ignorance they went; ignorant of almost all the horrors of up to date warfare. But they went! And all of our churches over the whole country bear proud, if sad testimony to the fact.

The first intimation of the immense struggle and its far flung disturbances is found in the September records of the Macdonald Memorial Church when, with one voice, the use of the hall was granted in advance, if the need should arise, for quartering soldiers. Four weeks and the halls of the country required for the needs of war! Was there anything during these days that engaged the attention of the people but that gigantic struggle on sea, land and in the air? The call for men was not long abroad when the young men of the congregation were beginning to respond. In all, of those who joined the Colours and served in the Great War, no less than 109 went from the congregation. It would have been a happy experience if we could have recorded that all these men returned but it was not to be. The homes of the congregation have had to bear heavily, if silent, the price of gallantry and service. What it has meant to them only the inmates fully understand. The home, like the heart, knoweth its own bitterness. There is in the vestibule of the church a tablet commemorating the service of all those who went and another commemorating those who made the supreme sacrifice.

It was, of course, not till the completion of the war that the setting up the Memorial Tablets was taken in hand. Those who undertook the scheme were Messrs Blackie, Doncaster, Lyle and Neill. They secured plans and estimates from several firms and finally the office bearers decided to give the work to Archibald Hamilton of Glasgow, for an estimate of something like £72. As may be seen, the tablets were done in brass mounted upon mahogany – a simple yet handsome design eminently suitable for the purpose, where the names need no embellishing but are glorious in themselves. An appeal was made to the congregation for a liberal collection by envelope and the response was the handsome sum of £64 2s 6d. For those who have survived the great struggle, perhaps even greater than this handsome testimony, will be to realise those ideals in peace set forth in the red flame of war.

One in name, in honour one
Guard we well the crown they won
What they dreamed be ours to do
Hope their hopes and seal them true

This war was noted for its wonderful “advance” in aerial warfare and these activities and engagements were not confined to the customary Front but extended anywhere and everywhere that the combatants chose to go. Night raids for destructive purposes were soon a common occurrence. Zeppelins and aeroplanes were heard in the dead of night. To impede their movements and direction the lighting restrictions were introduced with the result that the church was no longer a possible place for evening worship and the congregation retired to the hall. In this way, the second service was conducted week by week for some time.

In September of 1916, Mr Steele (Minister of Macdonald Memorial) was approached to go and work with the Troops in France in the service of the YMCA. He brought the matter before the Session and they unanimously acquiesced in his decision to go. The period was for three months. The Rev W R Thomson of the West U F Church (the present Bellshill St Andrew’s) kindly consented to act as Moderator during the minister’s absence. Just before Mr Steele left for France, he issued a pastoral letter to the congregation which was accompanied by a list of preachers during his absence. This thoughtful and friendly act on the part of the minister was very much appreciated by the congregation. Mr Steele was away during the first three months of 1917 and, during his absence, the office bearers gallantly kept the flag flying at home. This, of course, with the assistance of the ladies of the congregation, who diligently had their hands busy providing comforts for the soldiers and sailors. The Ladies’ Work Party has played an important part in the life of Macdonald Memorial U F Church, sometimes inconspicuously plying the busy needle and sometimes in the grand style as subsequent events will show. They arranged to send comforts to the soldiers and Mr Steele, therefore, was very grateful to receive from their hands some portion of these gifts that he might distribute them in the area where he was engaged. Moreover, a patriotic concert was arranged and similarly Mr Rusk gave a lantern lecture on the War, both of which efforts were to provide funds for these laudable schemes of the ladies. In the month of March an urgent letter came from the YMCA telling of the splendid work of the minister with the Troops and soliciting an extension of service for him. The Session felt they must needs listen to such an appeal and with the unanimous assent of the congregation, expressed their willingness to “carry on” for another month. So after a very successful, if arduous, four months, Mr Steele returned to the Home Front at the end of April.